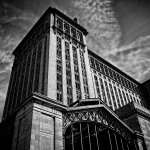 This image shows the Michigan Central Station in Detroit from the carriage entrance side. The shot was taken from the back side of the building, close to where the tracks came in to the building. Carriages used to drop off or pick up passengers from under the metal structure. 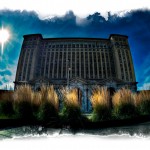 One of the coolest and most depressing buildings in Detroit has to be the old Michigan Central Station (Depot). The station was used by Amtrak until 1988 when it was abandoned and left to basically rot. The station consists of the main railway facilities as well as an 18 story office tower. The interesting thing about the office tower is that the top floors were never finished. Anyway, the building has been decaying for years and has been threatened with demolition many times. 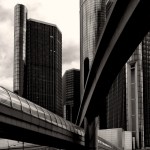 One of the best things about living in Michigan is when you get a warm, indian summer day in late October. The sun is starting to hang a bit lower in the sky and the afternoon light is terrific, particularly when coupled with blue sky and red or yellow leaves on the trees. Last weekend I spent an afternoon at Greenfield Village and the day just got better as the day went on. It was getting close to closing time at the museum and I was walking toward the entrance when I passed by the quarter-size replica of Ford’s original Mack Ave. plant. Something about the light on the building, the leaves in the tree and the clouds in the sky just compelled me to take this shot. I popped on my rental 16mm fisheye and set up my tripod to capture shots for an HDR image. 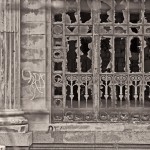 he Michigan Central Depot in Detroit, Michigan is such a perfect analogue to the city of Detroit. It was once a beautiful place but it has been allowed to decay. The building has been threatened with demolition for years, but so far it remains standing. Some good things are happening, at least in the surrounding area. Private organizations are working to clean up the park in front of the station. In addition, they are buying up buildings and either demolishing or attempting to rehabilitate them, depending on their condition. The depot itself is a favorite location for film shoots and has been featured in movies such as ‘The Island’ and ‘Transformers’ among others. It’s a shame that the best feature of the building is it’s decay, but if it helps raise awareness about the building that is probably a good thing.

I was looking through my Lightroom catalog trying to find images which might be fun to play with using the Silver Efex Pro plugin I just purchased. As I scanned across the folders, I found a series of images that I had taken at the Michigan Central Depot in Detroit, Michigan. The building is famous for both its beauty and sorry condition. It has been threatened with demolition, and yet it still stands. Several movies have been shot here and it is a popular place for urbex photographers to visit. 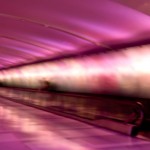 I figured that after a series of asylum pictures it might be nice to do something completely different. This shot was taken a couple of years ago when my family and I returned from a trip. The picture shows the tunnel which connects Concourse C to the main McNamara Terminal at Detroit’s Metro Airport. The tunnel is quite interesting. There is ambient music playing in the background and they use continually change the color of the lights. There are two long moving sidewalks which pass by long panels of glass sculpture. It’s a really nice change of pace from the typical chaos found in airports.

It’s hot here in Michigan, and elsewhere throughout the US, so I thought it appropriate to post this image of a child cooling off in a fountain. The picture was taken in 2008 during Scott Kelby’s Worldwide Photowalk held in Detroit, Michigan. The fountain is located along the Detroit riverwalk, just behind the Renaissance Center.