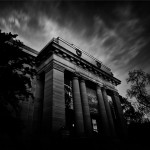 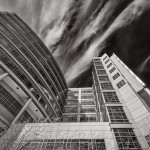 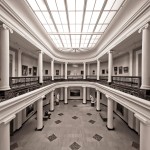 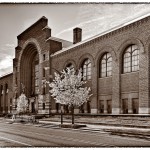 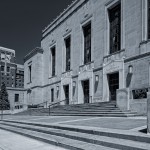 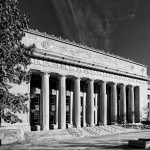 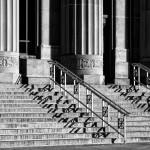 We had another nice late fall day here in Michigan, so I spent some of it wandering around Ann Arbor and on the campus of the University of Michigan. I was primarily using a 70-200 f2.8 lens that I had rented to play around with. The area I took this picture in is known as ‘The Diag’ since it is a large square area where several diagonal paths intersect. The shot was taken mid-afternoon, and with the recent switch to Standard time, the sun was coming in at low angle. With all the trees in the area, the sun made interested areas of light and shade. I had been primarily shooting campus architecture, but I saw these two people sitting next to the tree in the sunlight and I knew I had to take a shot. 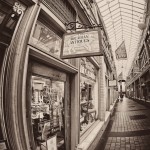 I’ve been feeling someone uninspired in my photography of late, getting bored with shooting similar subjects. I really enjoy shooting with a wide angle lens, but I typically use the wide angle for architecture shots to give me enough material to create reasonably straight lines. However, I’ve always enjoyed seeing images of architecture and other subjects which have been shot with a fisheye lens. So, just for fun and to mix things up a bit, I decided to rent the Nikkor 16mm fisheye for use on my D700. I went out for a walk around town late yesterday just to see what sort of interesting images I might be able to create with this lens. I managed to get a few that I liked and I enjoyed shooting with this lens.