I was going through some older images the other day when I ran across this one which I had taken a couple of years ago. I posted a different angle of the same building here. I decided that I liked this angle as well, especially because of the writing on the side of the building, so I thought I would work with the image to see if I could come up with something I liked. 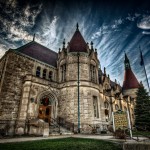 The old post office in Saginaw, Michigan is known as the ‘Castle’ post office, with good reason. It was built at a time when the government was trying to build government buildings which reflected the history of the area in which it was built. Saginaw was founded by French Voyageurs so the post office was built in the style of a French chateau. The program didn’t last long. It was scrapped after the first building because it was too expensive. Saginaw did get a nice post office out of the deal, however. 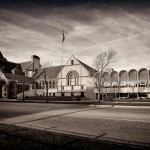 ‘ve shown several images from Saginaw which show things in various states of decay. However, not everything in Saginaw is falling apart. Saginaw was, and still is, home to many buildings of architectural significance. One of those is the Hoyt Public Library building. In 1882, Jesse Hoyt of New York bequeathed $100,000 to East Saginaw for the construction of a library. While an early design was done by Henry Hobson Richardson (he of ‘Richardsonian Romanesqe architecture fame) the final design was altered and executed by Van Brunt & Howe (no relation that I know of). The library was built in 1887. An expansion (seen on the right) was done in 1960 and was designed by the father of my best friend. 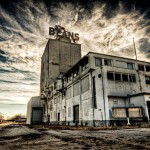 Anyone who grew up in Saginaw or spent any time living in the area, is probably familiar with the neon bunny on top of the Michigan Bean elevator. The lighted bunny has been a Saginaw fixture since it was first illuminated in 1947. From what I’ve read, the elevator is no longer in operation and the sign went dark in 1985. Fortunately a preservationist named Thomas Mudd, with support from Altrusa International obtained funding to get the sign lit once again in 1997. 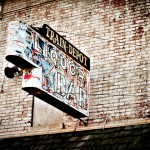 Welcome back to day 3 of my Saginaw series. The previous two days have been photos taken on Potter Street in Saginaw, Michigan. This shot was also taken on Potter Street, across the street from the train depot and just down the street from yesterday’s image. I don’t believe this bar is actually in operation. It also had a sign on the front stating that it was under ‘arson watch’. There was a building a couple doors down which did have some activity, however. For the most part Potter Street mostly consists of empty and derelict buildings. My original thought when I took this shot was to process it as an HDR image. Unfortunately I didn’t take the time to set up my tripod and my hand holding wasn’t steady enough to yield good results. Even with the auto-align feature of Photomatix, there were some elements that were ghosted. I probably could have fixed them, but I was able to create a final image which came close to what I was thinking with just one frame. 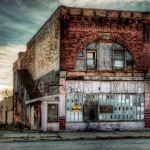 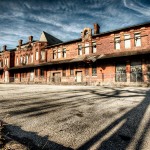 The image above is the old Pere Marquette train station located on Potter Street. Like many train stations in the midwest, this one is just rotting away. A few years ago there were people who were trying to find ways to restore the station, but I’m don’t know whether anyone is still trying. The station sits in one of the worst parts of Saginaw. It’s not a place that would tend to attract a lot of people and I just can’t see anyone investing money in this place unless the surrounding neighborhood was also improved. It’s a shame because the building is really quite nice.