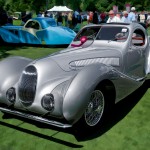 The Concours d’Elegance at St. John is coming up this weekend (July 28th) and in preparation I thought I might post an image or two taken at some past shows. This image was taken at the 2010 Concours d’Elegance held at Meadowbrook Hall near Rochester Hills, Michigan. The Concours was held at Meadowbrook for years, but for various reasons the event shifted to a larger venue at St. John near Plymouth, Michigan. The car in the shot is a 1938 Darracq/Talbot Lago T-150-C Roadster by Figoni & Falaschi. 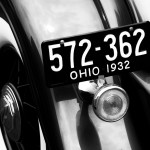 >I was going through my Lightroom catalog spending some time adding keywords and looking at images that I had ignored in the past when I came across this shot I took of a 1932 Lincoln. The car was part of the Classic Car Club of America show held at the Gilmore Car Museum. I really like the look of some of these old cars, especially the swooping lines of the fenders over the wheels. When I saw the image in the catalog, I immediately thought it would look good with a more painted look. The way the clouds were reflecting on the fender already had a sort of painted look so I enhanced it by applying some Topaz Simplify to the entire image. Just for kicks I wondered how the image might look with a bit more contrast, so I took the image into Silver Efex Pro2 and choose one of the darker presets which added just the contrast that I wanted. The black and white conversion made the tail light too dark, so I masked out the conversion, and applied a separate black and white layer which made the red color lighter, not darker. 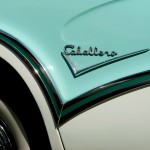 Yesterday I posted a detail shot from this 1957 Buick Century Wagon which I saw at the 2011 Concours d’Elegance of America show at St. Johns. It seemed to be popular so I’m posting a couple more shots today. The shot above shows another detail element of the car and the picture below gives you a look at the entire car. Processing on the first image was similar to yesterday’s shot. I used Topaz Detail on ‘Abstraction’ to smooth out some of the details, mostly in the paint, and then masked out the key elements such as the chrome ‘Caballero’ badge. For the bottom image, I used Topaz Simplify to make the background more abstract and painterly, but I masked out the car itself. 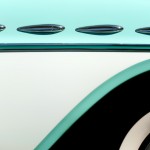 I’m slowly going back over some images that I shot over the summer to find ones that I either overlooked or never got a chance to work with. This image comes from the 2011 Concours d’Elegance of America show held at St. John’s near Plymouth, Michigan. The car is a 1957 Buick Century Caballero Estate Wagon. What caught my eye when I saw it was the interesting “Mint Green and Dover White” color scheme and interesting styling. As I was processing the image, the thought crossed my mind that the image sort of looks like the Eye of Horus with the exhaust ports being the eyebrow and the tire being the eye. 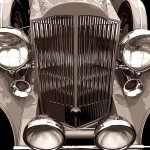 Yesterday I posted an image of a 1935 Duesenberg taken at the 2008 Concours d’Elegance held at Meadowbrook Hall. This image was taken from the 2007 Concours and was my first time visiting the show. The car in this image is a 1933 Packard V-12 Convertible Coupe, and is just one of fifty that were ever built. When new, the car sold for $4,000, which in 1933 was a great deal of money. 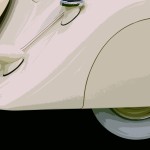 The Deusenberg is one of my favorite classic automobiles. The car just exudes power and class, and the companies that did the coachwork created automobiles with wonderful details. I took this shot at the 2008 Concours d’Elegance held at Meadowbrook Hall in Rochester Hills, Michigan. The car is a 1935 Duesenberg Model JN Roadster with coachwork by Bohman and Schwartz. The car has an interesting history. According to information displayed with the car, the automobile was purchased for Clark Gable from his wife, Carole Lombard. Gable owned the car until 1942 until his wife’s death at which time it was given away with instructions that it never be seen in California while he was still alive. 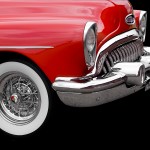 I’ve been going through my Lightroom catalog looking for interesting things to post to my Google + account and I came across this shot that I took at the Gilmore Car Museum in 2008. The car is a Buick Skylark Roadmaster, but I don’t know the year. I’ve just always liked this shot, the combination of red, black and chrome. 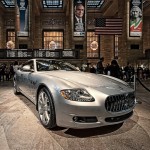 This shot was taken a couple of years ago when my wife and I were in New York City celebrating our anniversary. My wife had never been to Grand Central so we decided to check it out. On display in the main concourse was this Maserati Quattroporte automobile. I like shooting cars and architecture, so this seemed like a perfect find! It was cloudy outside and there wasn’t a lot of bright light flooding Grand Central so the lighting wasn’t the greatest. I was using my Olympus E-3 which tends to be grainy at higher ISO’s so I stuck with ISO 100. The car was isolated from the unwashed masses with heavy velvet rope held up by a series of metal poles. I was able to set my camera on top of one of the poles to get this shot. The image is rather sharp even though the exposure was just 1/6th of a second.

The mid 30’s Cord automobile has long been a favorite of mine. The distinctive feature being the ‘coffin’ nose and the exposed exhausts. On of my favorite Cord’s is a model 810. The car was introduced at the 1936 New York, Los Angeles and Chicago auto shows. The show car was unique in that it had copper accents. The show car is on display at the Auburn, Cord, Duesenberg museum in Auburn, Indiana. The 810 was designed by noted car designer Gordon Buehrig. The 810 was originally going to be a 1935 Duesenberg but after incorporating a front wheel drive design, the vehicle was renamed Cord. 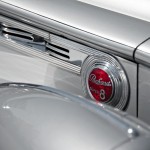 Here’s another shot taken at the 2011 Concours d’Elegance of America held in Plymouth, Michigan. This one shows a detail of the engine cowling of a 1940 Packard 180 Convertible Victoria. The Packard Motor Car Company started life in 1899 as the Ohio Automobile Company. Packard started the company after accepting a challenge from Alexander Winton to build a better car than was being produced by the Winton Motor Carriage Company. The Winton company was one of the first companies to sell motor cars and Packard had complained to Winton about the quality of his car. Packard changed the name of his company to the Packard Motor Car Company in 1902 and moved to Detroit in 1903.