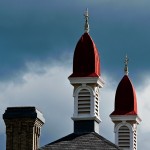 On a recent trip to northern Michigan, my wife and I visited Traverse City Commons. I’ve posted shots from this location before. The site is the location of the old Northern Michigan Asylum where they are converting the old buildings into retail, office and residential spaces. The weather the morning we arrived was cloudy, but breaks were beginning to appear in the clouds. As the sun peaked through it shone on the roof tops and really highlighted the towers/cupolas that are a key feature of the main building. 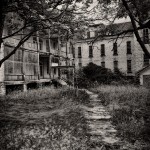 Ok, maybe it’s not really a garden path, but a path none the less. This shot was taken at Traverse City Commons, also known as the old Traverse City State Mental Hospital also known as the Northern Michigan Asylum. The hospital buildings and grounds are being converted from decaying hulks into retail shops and residential condos. A few buildings have been converted, but there are many others that are still in rough shape. The image above shows one such cluster of buildings. 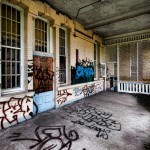 This is another shot from the old Northern Michigan Asylum in Traverse City. The design of the building included fenced in porches at the end of each floors. I’m sure when the asylum was open they would wheel patients out here for some air, but that’s just speculation. To take this shot I backed as far as I could into the corner of the porch. With the colorful graffiti, my plan was to take enough shots for an HDR to emphasize the color. 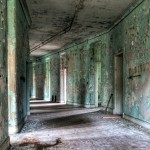 his is an interior shot taken at the Northern Michigan Asylum in Traverse City, Michigan. The asylum consisted of several buildings, some of which are currently under renovation for commercial use. Many of the buildings are still in rough shape, including this one. I was able to get a shot of the interior by sticking my camera through a missing window pane. While taking the picture I could feel a breeze on my face as wind blew through the building. There was a very distinctive old and musty smell to the air. 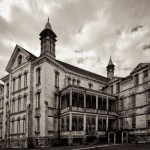 Traverse City, Michigan used to be the home of the state mental hospital once known as the Northern Michigan Asylum for the Insane. The hospital closed in 1989 and the buildings on the campus sat dormant. Recently there has been a push to repurpose the site as a combination of retail, housing and offices. The development is known as Traverse City Commons. Portions of the site have been renovated and the result is very interesting. Much of the site remains to be developed, however. The shot above shows one of the original buildings which has yet to be renovated. It retains much of its Victorian creepiness. While the place makes me wonder what went on during its years as an insane asylum, the history of this facility seems to indicate that it was rather progressive in its approach to treatment. Still, I see this place and all I can think of is ‘One Flew Over the Cuckoo’s Nest’. 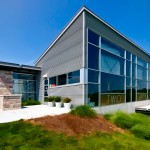 The image above shows Two Lads Winery located on Old Mission Peninsula near Traverse City, Michigan. The tall glass area is the tasting room which has a wonderful view of the east arm of Grand Traverse Bay. The grounds around the building were rather plain and gave the image more of a snapshot look. Ideally I would have liked to take this shot just after sunset, but when you are on vacation you shoot what you can when you can.