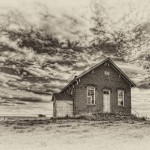 his image start life as an 8 shot HDR. The subject is one that I’ve visited many times, an old schoolhouse west of Ann Arbor, Michigan. I’ve worked on a couple variations of this shot. One was a straight color HDR, a second was a simpler black and white conversion of the color HDR and finally this version. In all cases the thing I liked the most was the clouds in the sky. My original black and white conversion created a reasonably dark sky which looked pretty nice but I decided to go for a more antique look with this version. To me it looks like the sort of image that appeared on old stereoscope cards. I used to love to use my grandparents viewer to look at their cards in wonderful 3D and perhaps that’s why I like the way this image came out. 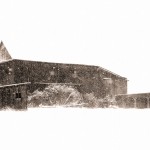 Continuing the theme of the last couple of days, this is another shot I took during our recent snowstorm. This barn is located on the other side of the road from where I took the Snowy Trees shot and just up the road from where yesterday’s Headstone picture was taken. 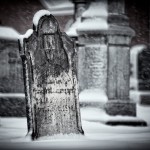 Just down the road from where I took yesterday’s image is a small cemetery. I’ve always felt odd about photographing in a cemetery, but I do find old headstones to be interesting. I suppose it is somewhat cliché to shoot a cemetery in winter, but with a blustery snowstorm going on around me, it just seemed like the right thing to do! The wind was really nasty and cold so I didn’t spend a lot of time here. I tried various angles and focal lengths and ended up liking this one the best. 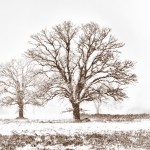 We received our first snowstorm of the season today and it created a nice opportunity for some winter photography. The weather yesterday was slightly warmer and we had some rain before the snow moved in. As a result, the snow stuck to the limbs of the trees. Early in the afternoon the snow was falling steadily but lightly, not much wind. By mid-afternoon an Alberty Clipper moved in and the wind really picked up. I had gone out around lunchtime to get some city shots in the gentle snowfall and I was planning on going out in the country to get some rural shots. When I went out later in the afternoon I debated about going. The wind was blowing down trees and knocking out dead limbs. I decided to take a short trip outside of town to see what I could find. This shot was taken a couple of miles from my house. On one side of the road was a barn (which I took pictures of) and the other side was the field with these trees in the distance. With the snow falling it created a foggy atmosphere and I liked the way the trees looked in the distance. I shot a handful of shots, focusing on the trees. When I got home and looked at the picture, I noticed the windmill off to the right which I thought added a nice element to the shot. 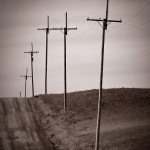 I’ve been looking at this image from time to time in my Lightroom catalog for some time. The picture was taken in 2008 and I’ve tinkered with it on and off since then. There isn’t really anything that interesting in the shot, but I like the simplicity and the repetition created by the poles. 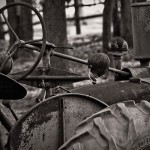 There is a golf course just west of Ann Arbor which has this nice old Farmall tractor on the edge of the course. I’ve photographed it several times, most recently this past fall. For this trip, I used my 70-300 lens to get more detail and shallower depth of field. For an alternative look at this same tractor, check out an earlier image that I posted to this blog. 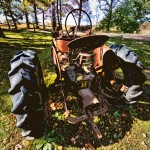 This Farmall tractor is located at the edge of a local golf course. It was a nice, sunny indian summer kind of day and I decided to take a short drive out in the country at lunch time. I have taken pictures of this tractor before at different times of the year but not in the fall. I was trying out my new Zuiko 7-14 ultra wide angle lens on various subjects just to get a feel for the lens. I’m not entirely happy with the lighting on the back of the tractor. The sun was coming from the left side and it placed the rear of the tractor in shadow. If I would have had a flash or a reflector, I would have tried to direct some light in to the back area. Still, I liked the angle of the shot.