This shot of downtown Detroit, Michigan was taken from Campus Martius park during Scott Kelby’s 2nd Annual Worldwide Photowalk. The tall building in the center is the Penobscot building and is one of the more recognizable buildings in Detroit. 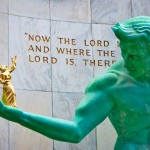 This shot, taken on Scott Kelby’s Second Annual Worldwide Photowalk, shows the statue known as The Spirit of Detroit. The statue was created by Marshall Fredericks, who is responsible for many pieces of art in Southeastern Michigan (and other places as well). 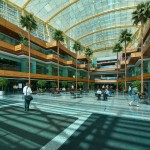 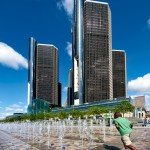 Today was the day for the 2009 edition of Scott Kelby’s Worldwide Photowalk. I participated in the Detroit photowalk led by Terry White. This shot was taken right at the start of the walk. Our walk started at the fountain on the riverfront side of the Renaissance Center (also known as the world headquarters for General Motors). I was actually lining up to take a shot of the fountain with the RenCen in the background when this kid decided he wanted to run through the fountain. Fine by me, I think it made for an interesting shot.

‘The Fist’ is a sculpture made in tribute to Joe Louis aka ‘The Brown Bomber’ and sits in the middle of a busy intersection in Detroit, Michigan. The 24 x 24 x 11.5 feet Monument to Joe Louis was commissioned by Time Inc. for the City of Detroit to honor Joe Louis. It was created by sculptor Robert Graham and installed at Jefferson Avenue at Woodward, Detroit on October 16, 1986. Over the years the artwork has been the subject of controversy. 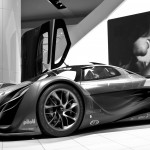 This shot was taken at the 2008 North American International Auto Show. The Mazda display had a video screen which showed a variety of images and I thought the juxtaposition of the mother/child as a backdrop to a high speed sports car was an interesting mix. Afterwards I noticed the gentlemen on the left side which I also think add something to the shot. The original was color and I converted it to black & white using Photoshop.