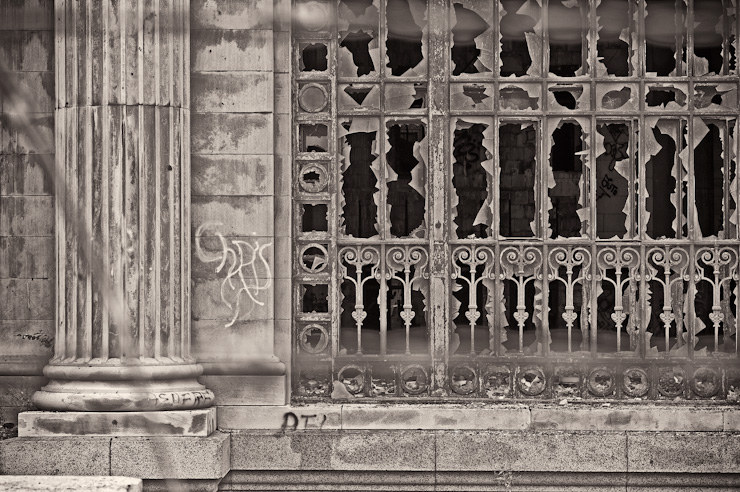 The Michigan Central Depot in Detroit, Michigan is such a perfect analogue to the city of Detroit. It was once a beautiful place but it has been allowed to decay. The building has been threatened with demolition for years, but so far it remains standing. Some good things are happening, at least in the surrounding area. Private organizations are working to clean up the park in front of the station. In addition, they are buying up buildings and either demolishing or attempting to rehabilitate them, depending on their condition. The depot itself is a favorite location for film shoots and has been featured in movies such as ‘The Island’ and ‘Transformers’ among others. It’s a shame that the best feature of the building is it’s decay, but if it helps raise awareness about the building that is probably a good thing.

The image above was taken through the fencing which surrounds the station. You can see that the station was once a thing of great beauty, a station built in the Beaux Arts style of the early 20th Century. Processing was limited to making some minor perspective corrections and converting the image to black and white. I used Photoshop with Nik’s Silver Efex Pro to do the conversion. When processing, I tried to make sure that the interior of the station was still visible. It may be hard to see at a smaller size, however. You can compare the finished image above, with the raw shot, shown below.

For more information on the Depot, visit the Michigan Central Station Preservation Society on Facebook and www.savemichigancentral.com