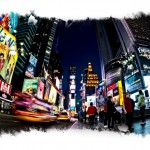 After posting several black & white images, I thought it was time for something in color. Last year I had the opportunity to visit New York City to hear my son perform at Carnegie Hall with the Ann Arbor Pioneer High School Symphony Band. It was a terrific performance and a great trip. Naturally one of the places we visited on the trip was Times Square. While definitely a touristy destination, it is also a terrific place for photography.

One of my favorite places to visit and subjects to shoot in New York City is the Guggenheim Museum. Designed by Frank Lloyd Wright and opened in 1959, it is a unique structure and makes for some interesting photography. This shot was taken across the street using the Sigma 15mm fisheye lens. What I find interesting about shooting with a fisheye in a ‘street’ situation is the way it can incorporate elements that you weren’t expecting. I composed the shot for the museum. I thought the cars moving through the shot added another level of interest. I didn’t expect the cyclist, but I’m glad he popped into the frame as I took the shot. 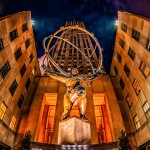 I recently received a request from a potential client for an image of Atlas that they might want to use in their lobby. The customer was looking for something that would ‘pop’. I had a few shots of the Atlas statue located in Rockefeller Center and I looked them over for one or more that might meet the client’s requirements. The main problem I was having is that most of the shots I took were taken at night which limited the color palette available. When looking over my catalog, I came across this image taken earlier in 2012 that I thought might have possibilities. 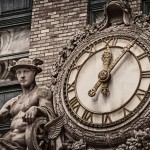 This is a shot of the clock which sits above the Park Avenue entrance to the Grand Central Terminal area. The clock belongs to the old New York Central Building, now called the Helmsley Building. The final image was created by blending a sepia toned layer with a color layer in Photoshop, using about 75% of the sepia layer. I wanted to have just a hint of color, especially in the hands of the clock. 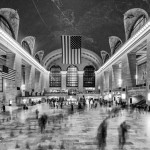 Today (Feb 2, 2013), is the 100th anniversary of Grand Central Terminal in New York City. In honor of this anniversary, I present this shot of the main terminal area that I took in 2008. I wanted to capture the ‘active’ feeling of the terminal area so I chose to shoot this with a long exposure. Unfortunately I did not have a tripod (or tripod permit) so I ended up shooting this with my camera resting on the railing of one of the end stairway landings. The recorded exposure was 3.6 seconds which gave the image some nice blur, what is a bit confusing to me, however, is the repetitive feet that you see in the image. I’m not sure exactly how those were captured. Certainly people were moving so I would have expected blur, but these almost look like they were captured from a stroboscopic effect which I definitely do not remember. 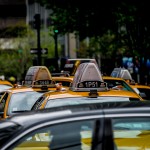 One of the most common sights to see in New York City are the ubiquitous yellow cabs, they can convert the streets of Manhattan into a river of yellow. On a recent visit to New York I had to opportunity to wander around. I had a 28-300mm lens on my camera and with the lens racked out to 300mm I snapped this shot of group of cabs in the Midtown area. I like the compression you get out of a telephoto lens as well as the shallow depth of field and I like the look of the cabs and the repetition of their roof top signage.

Warehouse – From the High Line, NYC 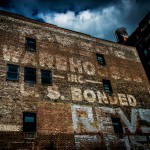 For those who don’t know, the High Line in New York City is a wonderful linear park created out of an abandoned rail line. The elevated tracks that used to service the various warehouses and industries in the Meatpacking and West Chelsea neighborhoods now offer a wonderful view of New York for pedestrians. If you ever get to New York, I highly recommend spending some time visiting this park. The shot above was taken during my visit to New York this past April. 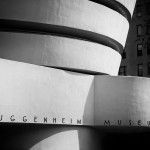 I’ve been viewing an online photography course called Photoshop for Photographers, taught by Ben Willmore and presented on creativeLIVE.com. I’ve been using Photoshop for years and have view many tutorials and read various books and articles. Still, watching this course gave me some deeper understanding of how to make the most of Photoshop along with learning some new techniques that I hadn’t tried before. One of the areas that I found interesting dealt with retouching images, especially how to best make use of the Clone Stamp, Spot Healing Brush and the Healing Brush. I decided to look for some images in my catalog that I could practice on and I came across this image of the Guggenheim Museum in New York City that I had taken a few months ago. 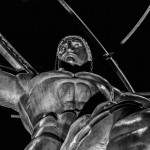 Whenever I visit New York City I like to spend some time around Rockefeller Center. I love the Art Deco styling of the buildings and the sculptures. An impressive example of this is the statue of Atlas, which stands directly across the street from St. Patrick’s Cathedral. The statue shows Atlas holding up the world and was created by sculptor Lee Lawrie with help from Rene Paul Chambellan. The statue was installed in 1937. I’ve always admired this statue for it’s strong Art Deco style. When I was in New York this time, I wanted to make sure I got a close up of the statue. In close you can really appreciate the detail work that makes the statue so stunning. 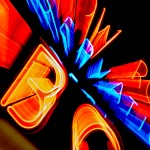 I’ve been rummaging though my archives looking for interesting images to post to Google+ and I came across this shot that I took in 2008. I was in New York on business and I was staying in Midtown. I had some free time so I took the opportunity to walk over to Rockefeller Center and take some pictures in that part of town. The GE Building, also known as 30 Rockefeller Plaza or just 30 Rock has a restaurant and club on the 65th floor called the ‘Rainbow Room’. On either side of the building there are entrances which are marked by these neon signs. I was feeling experimental so I took a few shots of the sign using a slower shutter speed and zooming my lens while the shutter was open. Of the ones that I took, this was my favorite.