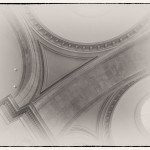 On my last trip to New York (too long ago), my wife and I visited the Metropolitan Museum of Art. It was a rainy Sunday and the museum was quite crowded. This was my first time visiting the museum and I really enjoyed shooting some interior shots. Unfortunately the camera I had at the time wasn’t great at higher ISO values. I took several shots of the main entry area, but many of them ended up being blurry because the exposures were too long. My camera had image stabilization which did help me hand hold some shots at slower speeds, but too many shots still ended up being useless. The one you see below was a borderline image. I liked the composition with the arches and the skylights and for the most part the image was fairly sharp. I finally spent a little time with it to see what I might be able to come up with. 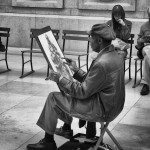 The image above is another picture that I took on a trip to New York in late 2009. My wife and I were visiting to celebrate our wedding anniversary. It was fall and the weather wasn’t particularly nice, so we spent some time in the Guggenheim and Metropolitan Museum of Art. We were walking through the Met when I saw this gentleman working on his own work of art. He was so still and quiet he almost appeared to be a work of art himself. 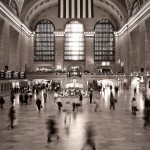 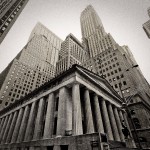 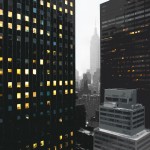 I was in New York on business recently, and early one morning I took a look out of my hotel window to check on the weather. Snow had been predicted and I wanted to see if it was snowing yet. When I looked out, I was captivated by the color and geometry of the skyscrapers, particularly the way the windows were lit. Since it was early, only a handful of lights were on and it created an interesting pattern. As I looked further, I could see the Empire State Building in the haze, a haze created by a light snowfall. I really liked the combination of the strong, modern geometric shapes in the foreground combined with the older architecture of the Empire State Building fading into the background. 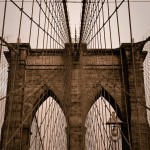 This is a fairly standard shot of the Brooklyn Bridge in New York City. This is a shot of one of the towers that I took as I was walking from Manhattan to Brooklyn. This was the first time I had walked on the bridge and it was an interesting experience. I think the thing that struck me the most was the geometric patterns created by all the suspension wires. I tried to capture that in this shot. In processing, I converted from color to black and white and then added a sepia tone. I also added a bit of simulated film grain to give a more vintage feeling to the image. 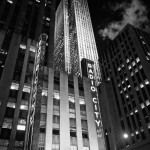 This is a shot of Radio City Music Hall in New York City. In the background you can also see 30 Rockefeller Center. I was in town on business and walked down to Rockefeller Center to take some shots. I didn’t have a tripod so I had to do everything hand held. I remember standing across the street from Radio City to take this shot. I tried to support myself has best I could in order to get a clean shot. My Olympus E-3 has in camera stabilization and I think that helped keep the shot clear as well.