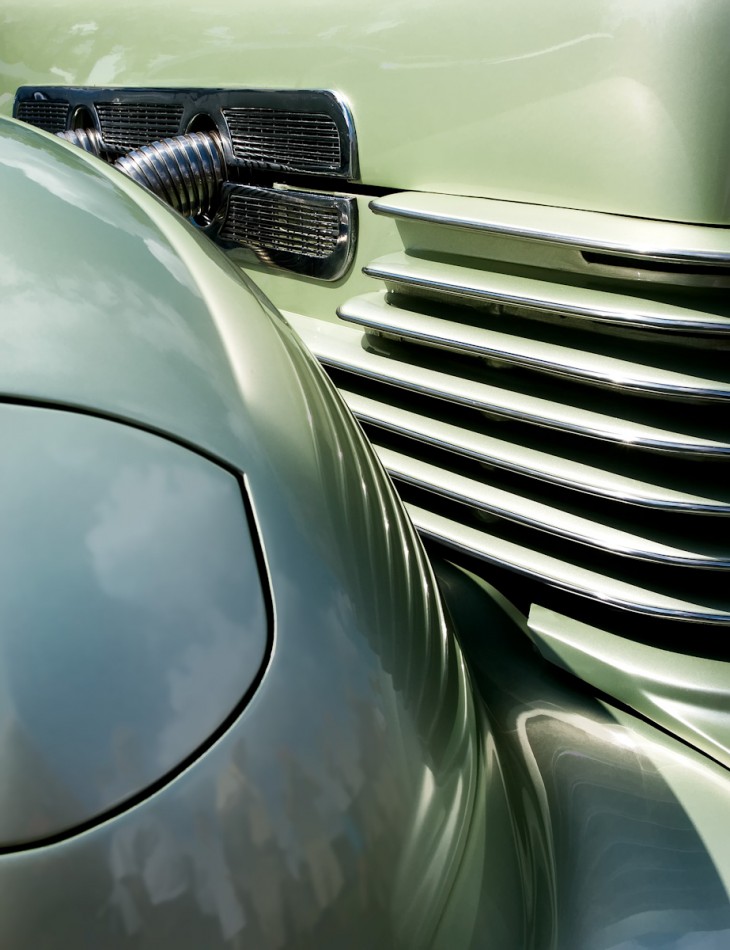 This shot shows a 1936 Cord 810 S/C Phaeton which was on display at the 2009 Concours d’Elegance car show held at Meadowbrook Hall in Rochester Hills, Michigan. I’ve always been attracted to the Cord, particularly those from the mid 1930’s. I love the design elements, particularly the ‘coffin’ nose and the exposed exhaust pipes. The car just has great lines and exudes class.

I originally posted this image on Flickr shortly after the event. A couple weeks later I was surprised to receive an e-mail from the owner! His daughter had seen the picture on Flickr and had told her dad. One of the highlights for me about this car was the unique color. Most Cords that I have seen are black, brown, cream, but this one had a very interesting green metallic color, very sharp. He gave me some additional backstory on the color used for the car:

I picked up this Cord as a severely butchered rear-drive hot rod in 1959. It took me until 1967 to get it all back to original and I enjoyed driving it almost daily until 2005. By then it was a very tired dark green driver with many scratches, mis-matched paint repairs etc A close friend offered to spend the weekend painting it all one colour so it would be a bit closer to presentable. The weekend turned into three years and a month with both of us working every spare moment on it. The colour was being considered by a self appointed committee of about six. I wanted a lime green like Duesenberg engines are, they were coming up with black cherry, copper, multi colour chamelion, and then we hit upon the pearlessence type light green. A very possible but unknown original colour! Without the experimental pearlessence it would be “Ganges Green” I believe, it is the fish scales that make it “glow”.

Another interesting bit of information that I learned from the owner was that this car was the inspiration for a painting by noted automobile artist Tom Hale. The rights to the painting were purchased by Kruse and used on a poster promoting a show at the Auburn Cord Duesenberg museum in 2008, seen here:

I’ve always admired the work of Tom Hale, even though I didn’t really know much about the artist. I really like the strong graphical quality of his work.

My finished image is a combination of the raw image with a contrast adjustment combined with some ‘simplification and blurring’ over the front fender. It was a bright, sunny day and it was hard to control reflections. I first used the Topaz Simplify filter in Photoshop CS4 to de-emphasize the people in the reflection. I masked out the parts of the car that I wanted to remain sharp. I then used the blur tool to smooth out the image a bit more.