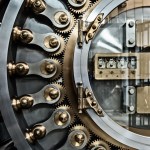 This past weekend the Chicago Board of Trade opened it’s bank vault to the public. The bank vault was one of many places in Chicago that were open to view as part of the 2013 Open House Chicago event, sponsored by the Chicago Architecture Foundation. Not surprisingly, the vault was a popular destination for photographers and non-photographers alike. What attracted my eye the most was the enormous vault door with its intricate locking mechanism. I also found the use of the contrasting metals to be quite attractive. I don’t know if there is an engineering reason for the selection of metals, or whether it was just an example of great combination of functional and aesthetic design, but the end result was wonderful. 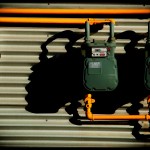 This image shows a couple of gas meters located on the side of a building next to the office where I work. I’ve always liked the way these meters look in strong light. I like the look of the yellow pipe agains the gray metal siding and I like the shadow patterns created by the sidelight. I’ve seen this image in my head for months but I never bothered to take a picture of it until just recently. 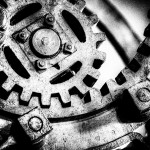 When the weather starts to get worse, I like to take the time to visit the Henry Ford Museum in Dearborn, Michigan. The museum houses a great collection of ‘industrial’ artifacts and they are quite reasonable about photography. One of the areas that I like to visit is the section on power generation. The museum has a great collection of generators from very old to more modern. I’m just attracted to the large scale and interesting mechanical details of these machines. 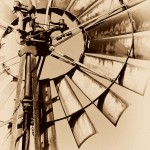 On my way to visit my parents a few days ago I noticed this old windmill at a nearby farm. I don’t know what it is, but I really like old machinery, especially if it is rusty or crusty, so I had to stop and take a few pictures. None of the shots were particularly outstanding, but I liked this one the best of the lot. I initially thought about leaving this as a color image since I like the color combination of the rusty orange and the blue sky, but in the end I went with an antique sepia toned look courtesy of Silver Efex Pro. 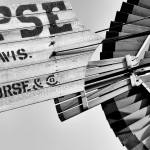 With a turn to nicer weather yesterday, I decided to go out for a drive to look for interesting subjects to shoot. I was sort of in the mood for things old and rusty, but I didn’t really come across anything which struck my fancy. Heading home, I drove by an old train depot in Saline, Michigan which has been converted to a historical museum. I have driven past this location many times and had never paid it much attention. On this day, however, I noticed a couple of cool elements, one of which was this large wooden windmill. This is a 10ft diameter windmill which is similar to an 18ft windmill which was originally installed at the site. According to the museum’s web site, “The Eclipse was once the most popular of all wooden windmills. It was painted an unusual shade of red and green, colors described by windmill writer, T. Lindsay Baker, as “cow patty green with buzzard blood red tips.” All I know is that I liked the pattern created by the blades. Even though the color is unique, I decided to go with black & white to draw the eye to the patterns rather than the color. 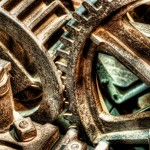 f you have been following my blog for any length of time you should know by now that I enjoy photographing mechanical things. There is something about old, analog technology which I find fascinating. Perhaps it’s the texture of old metal, perhaps it’s the color, and sometimes it’s just the shear size of the thing. This object in this image had all of those things. This picture was taken at theHenry Ford Museum in Dearborn, Michigan. The museum has a great section of large generators and steam driven machines and every time I visit there I’m drawn to that area. I don’t recall exactly what this picture is showing, I just remember really liking the way the gears looked.

The image above was taken on a recent visit to Greenfield Village in Dearborn, Michigan. I went for the annual Motor Muster, but spent some time touring the various exhibits. I’ve previously posted images from the Machine Shop, and this is another one from the same shop. My goal in this shot was to try and capture the feeling of the machine, gritty and oily. You can see metal shavings from the cutter, but what I really liked was the can of oil. The title of the image comes from the writing on the can ‘Dark Cutting Oil’. 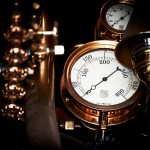 This image was taken at Greenfield Village in Dearborn, Michigan during the recent Motor Muster car show. The village has some great exhibits, one of them being a railroad roundhouse. One of the permanent items in the roundhouse is an old steam engine. The engine has wonderful brass detail, particularly in the control area.

This past weekend I visited Greenfield Village in Dearborn, Michigan to see the annual ‘Motor Muster’ car show. I got some nice pictures of cars and other items (which I will be posting over time) but I also spent some time in some of the historical buildings which comprise the Village. One of the buildings houses the ‘Armington and Sims’ Machine Shop and Foundry. This building contains a working machine shop with lots of interesting machining tools. When items are needed around the village, they still use this shop to fabricate them. The picture above shows one of the various machining tools found in the building. All of the tools are driven by belts which are hooked up to one driving machine. 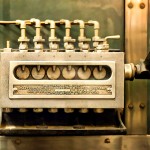 One of the nice places to visit in Southeastern Michigan is the Henry Ford Museum in Dearborn, Michigan. The museum contains a wonderful collection of artifacts, mostly centered around manufactured items. One of my favorite areas of the museum to photography is the area which contains a collection of old generators. These things were originally installed in manufacturing plants and most are quite huge and quite impressive. This particular image shows just a small portion of a huge generator which used to be installed in a Ford Motor Company automobile plant in Highland Park, Michigan. The item shows an oil pump used to feed oil to this huge piece of machinery.