I’ve been doing black and white conversions in Photoshop for some time now, but I’ve always been interested in the results I’ve seen from Nik’s Silver Efex Pro plugin. Well, I finally took the plunge and purchased it. As a quick test of the software I decided to try it out on an image I had been playing around with.

The picture shows the Greyhound bus depot in Ann Arbor, Michigan. The depot itself was built around 1940 in the Streamline Moderne style. I’ve always enjoyed the look of this building, although its a shame that it hasn’t been kept in better shape. I took this picture on an early morning walk I made around town a couple of months ago.

Processing consisted initially of a tighter crop to focus more on the key features of the building. I debated about using something like Topaz Simplify to create a more abstract image. I liked the angle of the shadows across the front and the Simplify filter really emphasized the shadow and reduced the detail in the shadow. I liked the image, but when I got Silver Efex Pro I decided to see what I could do with that tool. I honestly didn’t spend a lot of time working this image. I tried a variety of the presets until I found one which I thought looked nice. Turned out it was the Holga preset. I set the film type to Kodak ISO 32 Panatomic X to get a low grain look. I then did some additional tweaking of the parameters to get the final result. In the future I will spent some more time learning how to use the control point feature, but I’m pleased with my first usage of the tool. By way of comparison, the original image is shown below: 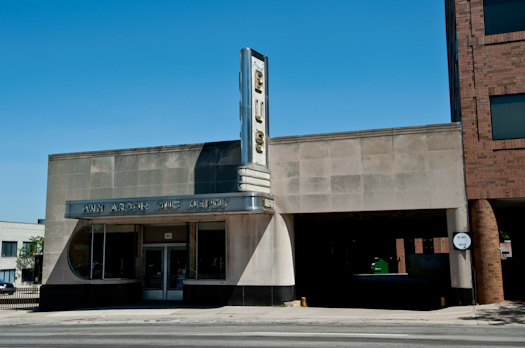