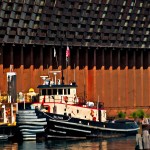 This past weekend my wife and youngest son took a trip to Michigan’s Upper Peninsula to visit the campus of Northern Michigan University. NMU is located in Marquette, Michigan, which is a terrific little town. The town is located on the shores of Lake Superior and has a wonderful collection of historic buildings and interesting sights. This shot was taken down in what is known as the lower harbor. The lower harbor has an old ‘ore dock’ which is a large structure used to load taconite pellets on to large ships. Marquette has two of these docks, one is still in use. The image shows a tug boat parked in front of the dock.

Morning at the Grand Hotel 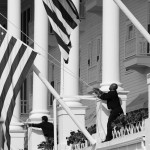 This is another shot of the Grand Hotel on Mackinac Island, Michigan. While spending time on the island, I took a walk one morning hoping to get a morning shot of the hotel. The morning had been cloudy and rainy but as I left my hotel room the sky started to clear up. The island isn’t very big, particularly the ‘downtown’ area, so it didn’t take me long to walk from my hotel across town and up the hill to get to the Grand Hotel. I took a few shots as the sun came out from behind the clouds but I noticed that the flags which normally adorn the porch weren’t flying. Somehow it made the hotel look a little to plain. As I was shooting, I noticed these gentlemen starting to put the flags out on the porch. I thought it made for an interesting shot.

The Grand Hotel on Mackinac Island is an impressive structure built by the Mackinac Island Hotel Company which was formed by a group including the Michigan Central Railroad, Grand Rapids and Indiana Railroad, and the Detroit and Cleveland Steamship Navigation Company. The idea was to promote tourism to the island in northern Michigan and encourage people to travel using the railroads and steamships of the owning companies. The hotel boasts the longest porch. Of course, these days you have to pay $10 to walk on the porch if you aren’t a guest of the hotel. The hotel maintains some quaint traditions, such as requiring gentlemen to wear coats after 6:30 pm and women to wear dresses or pant suits. Other than the expense, its one of the reasons I’ve never stayed there. 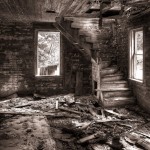 My wife and I have been visiting the Good Hart area in northern lower Michigan on and off for many years. We used to rent a house on Lake Michigan in an area known as Middle Village. Almost across the road from the house we rented was an old, decaying structure. It wasn’t until this year that I actually bothered to take some pictures of it. Given the state of decay I wouldn’t be surprised if the building is gone in the next few years. Middle Village itself was originally an Ottawa Indian village. A Jesuit Mission was established at Middle Village in 1741 and was rebuilt by Native Americans in 1823. A church, built in 1889 and a cemetary remain. The church is still used during the summer. Some additional information about the area can be found here.