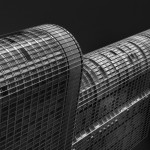 This shot of the Trump International Hotel and Tower in Chicago, Illinois was taken on a late sunny winter’s day. The sky was still a deep blue which created a nice background for the building. I took several shots, most in a ‘normal’ orientation, but then I decided to capture just a section of the building on an angle. I debated about whether to just work with the color version of the image, but after I experimented with black and white I decided that was the direction to go. Processing was mostly accomplished in Photoshop via Silver Efex Pro 2. The first thing I did was darken the sky by reducing the blue sensitivity. The building had a lot of blue in it as well, so I added several control points to bring back some exposure to some of the darker areas. The only thing I’m a little unhappy with is the loss of the distinctive ‘bands’ of windows that you can clearly see in the color version. I think the only way I could highlight the bands in a black and white version would be to make the building much brighter overall and keep the bands dark. I might experiment with that, but I also like the dark look of the building so I might just sacrifice the bands.

This image shows the Jay Pritzker Pavilion located in Chicago’s Millenium Park. The structure was designed by noted architect Frank Gehry. One interesting fact about this ‘building’ is that due to various building code regulations in the city of Chicago, this structure cannot be called a ‘building’, but must be referred to as a ‘work of art’. I find this structure fascinating. It is ever changing based on the lighting it is receiving. I also enjoy looking for various abstract patterns that I can photograph. 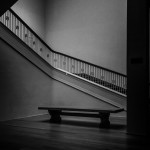 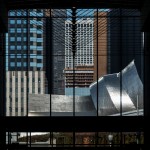 My wife and I had an opportunity to visit the Chicago area recently. We were in town for a tour sponsored by the Frank Lloyd Wright Preservation Trust” called ‘Wright in Racine’. The trip took us to Racine, Wisconsin where we were able to tour Frank Lloyd Wright’s “Wingspread”, the home for Herbert Johnson of S.C. Johnson Wax, as well as the Johnson Wax Administration Building. After the tour we spent some additional time in the city of Chicago. One of the great places to visit in Chicago is the Art Institute of Chicago. This museum houses a great collection of art. While we were visiting, I noticed this shot looking out of the museum toward Millenium Park. The way the lights were hanging and the way the windows were shaped, I was reminded of the leaded glass windows that Frank Lloyd Wright had designed for the Darwin Martin House in Buffalo, New York. The windows had a pattern that Wright called ‘The Tree of Life’. With a bit of a crop, this shot from the museum reminded me of those windows. 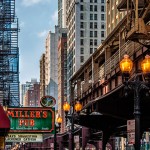 This summer I participated in the Google+ 1 year anniversary photo walk in Chicago, Illinois. I hadn’t been to Chicago in quite a while and it was a good chance to see the city and meet some talented Chicago area photographers. At the end of the day, while walking back to my car, I spotted this shot of Miller’s Pub on Wabash St. I liked the way the sun was shining on the taller buildings in the background combined with the ground level details such as the fire escapes and the supports for the ‘L’ train.