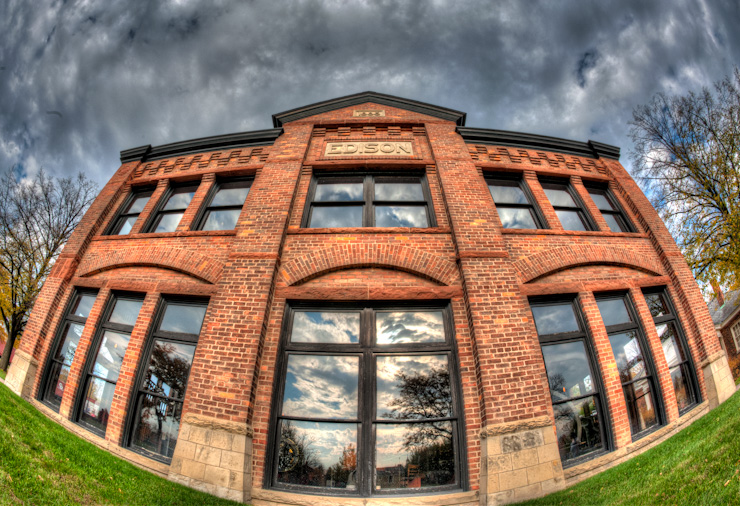 I’ve only got a couple more days before I have to send my lens rental back so I took advantage of the wonderful weather we had this weekend to once again visit Greenfield Village in Dearborn, Michigan. The day started out somewhat cloudy, but the temperature was pleasant and as the afternoon wore on, the clouds moved on. As I was walking by this building I noticed that the clouds were starting to break up and make some interesting formations. The sun was also getting lower in the sky and was adding some additional warmth to the building. I had been shooting with a longer lens, but I decided to switch back to the fisheye to see what I might be able to capture. I had my tripod with me so I decided to shoot some brackets for an HDR image. In order to make this shot, I had to crouch down very low to the ground and try to get everything lined up. I could have backed up, but I wanted the closer shot. Other than HDR processing using Photomatix, the picture is pretty much as the camera took it. I cropped just a bit from the sides, but nothing significant.

The building itself is a one-quarter replica of the Edison Illuminating Company’s Station A, the first power plant in the city of Detroit. Henry Ford worked at the Edison Illumination Company as a steam engineer eventually rising to chief engineer for this plant in 1893. This building contains some very cool generators, including one generator which came from the Edison plant located on Pearl Street in Manhattan. I was told that for a while this plant actually provided some power to the museum, but years ago the government deemed the operation unsafe (I don’t know the reason) and the steam engine and generators no longer run. It’s a shame because it would be really cool to see these things run, if only as a demonstration.