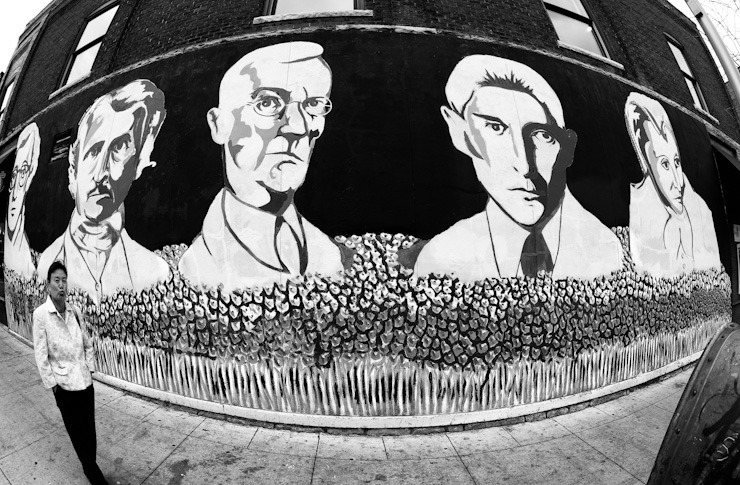 One of the amazing things about the 16mm fisheye on my D700 is just how wide an image you can get. The D700 viewfinder does not show a 100% view and I was surprised when I was looking at my fisheye shots at just how much more information I had on the edges that what I saw in the frame. In the shot above, however, this wasn’t the case. The main subject of this shot is a mural painted on the wall of a building in Ann Arbor, Michigan. The mural was originally done in 1984 and the original artist was just in town to touch it up. Originally there was a bookstore located in the space above the mural, but has since moved to a different location. The mural depicts Woody Allen, Edgar Allen Poe, Herman Hesse, Franz Kafka, and Anaïs Nin. The amusing thing about this shot is the woman on the left. I was taking a straight-on shot of the mural and I saw this woman walk up and stop. Obviously she didn’t want to walk in front of my picture. What she didn’t know is that with the wide angle view of the fisheye, she was actually in the shot. Not a problem, however, since I think she adds an additional element of interest to the image.

Processing consisted of using a few layers of Nik’s Silver Efex Pro, each layer performing some part of the transition from color to black and white. When I did the conversion, I wanted to make sure that I kept some separation in the painted flower bed. A simple conversion made all of the flowers look the same. I used 3 or 4 layers to control each layer of flowers and to add some additional ‘structure’ in places. I also used a couple of simple curves layers to darken some areas and add some contrast. Compare with the color shot seen below. 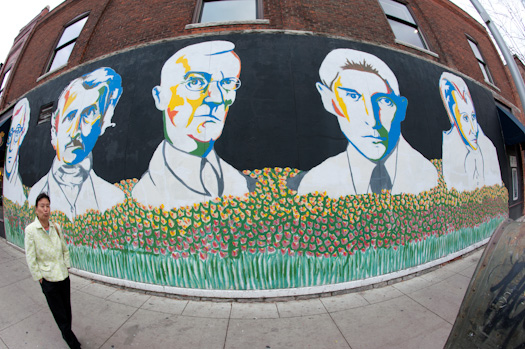 As always I’m interested in your comments and feedback.