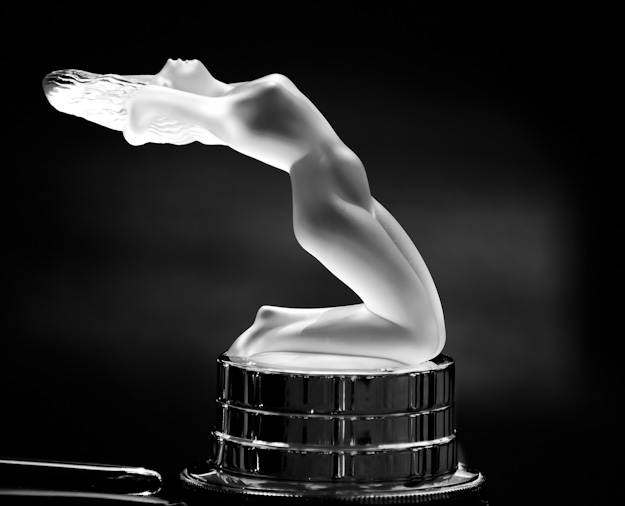 This past weekend I attended the 2010 Meadowbrook Concours d’Elegance held at Meadowbrook Hall on the campus of Oakland University in Rochester Hills, Michigan. The show is never a disappointment, with a large collection of classic automobiles. I really enjoying photographing the details of classic cars. The cars, particularly of the 30’s and 40’s were a wonderful combination of art and engineering. A perfect example is shown above.

This image shows the mascot, or hood ornament of a 1935 Packard Model 1405 Phaeton by Dietrich. The ornament is by Lalique, called ‘Chrysis’. I don’t know if it is original to the car or a replacement. The car itself has an interesting history. It is one of only three of this model ever made, and only two remain. The car was part of the inaugural parade for FDR’s second term. It was owned for a time by Domino’s Pizza founder, Tom Monahan. In 1986, it competed in the Great American Car Race. It is a wonderful example of 1930’s automobile coachwork. 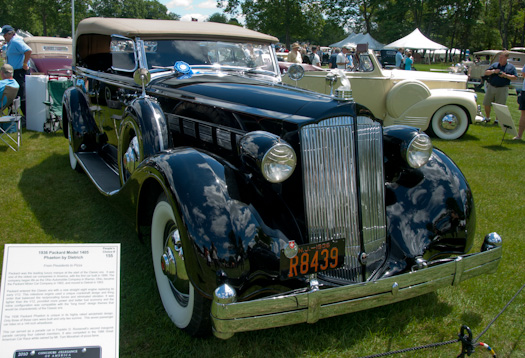 Processing of the mascot image primarily involved cropping from the 35mm format and converting to black & white. When I took the shot, I tried to get a background which wouldn’t distract from the hood ornament. In a car show, it is sometimes difficult because they have the cars packed so closely together. I was lucky with this one. I was able to get an angle on the shot which put a patch of grass behind the mascot. When I converted the image to black & white, I toned down the green until it become a soft back light. The raw, out of camera image is shown below. 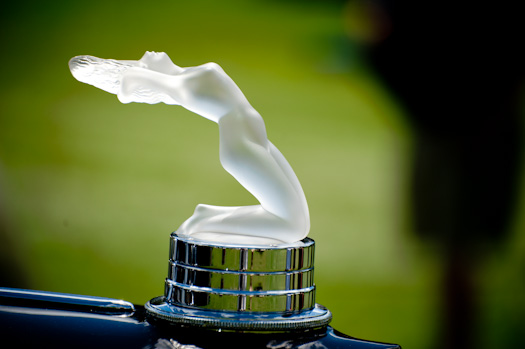 I’m not sure this is going to be the final version of this image. I think I might crop just a bit more to create a square image. I might also eliminate the bit of the car hood that you see on the left, leaving just the mascot on the pedestal. I played around with that a bit and I haven’t decided whether I like it better or not. I took a few other angles of the same subject. I like the one below because of the bright spot in the upper left but would also look nice cropped down from the top as well. 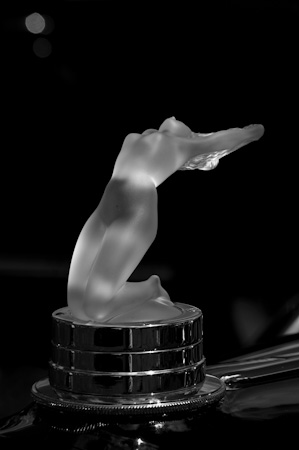 As always, please feel free to leave your comments, suggestions and opinions.

I’d like to thank Steve Brown for information on the name of the hood ornament. If you like cars, check out his Flickr gallery. Wonderful stuff.