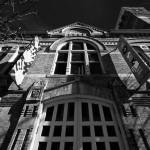 We finally had a nice spring day in Ann Arbor this past weekend and I decided to take the opportunity to wander around town with my camera. I took several shots, most of them using my 7-14mm wide angle lens. This particular shot shows the Ann Arbor Hands On Museum from what used to be the front of the building. The museum opened in 1982 in what was originally a fire station.

Review of the Wacom Intuos 4 Tablet

I recently purchased a new Wacom Intuos 4 Tablet primarly to use with Adobe Lightroom and Photoshop CS4. This product was recently announced at the NAPP Photoshop World held in Boston, MA. I’ve been using a table for several months, mostly to help with creating layer masks in Photoshop. I was using an old Wacom Graphire tablet that someone at my work had decided they no longer wanted. I found using the tablet to be quite helpful in creating masks and doing fine grained work on my images, but that was the extent of my use. When I heard about the new Intuos 4 Tablet, I decided it was time to take the plunge and get a ‘real’ tablet. I was not disappointed.

One day I was sitting at home when I noticed that some interesting clouds were forming in the sky. I took this opportunity to head in to town and do some architecture shooting. I had been wanting to get some more shots of the new Stephen Ross School of Business building on the campus of the University of Michigan in Ann Arbor. The building offers some interesting opportunities for architectural photography. There are many different colors, textures and shapes to explore. …

Lines in the Sand

This shot was taken in North Myrtle Beach, SC where I had spent some vacation time last year. The beach there is quite wide and firm at low tide and people like to ride bicycles on the sand, particularly recumbent tricycles. People really seemed to like to ride these things in circles, making interesting patterns in the sand. I was heading out of our hotel room to look for pictures to take and I noticed these two cyclists on the beach making some interesting patterns in the sand. Just as I was framing the shot, they decided it was time to move on. I had wanted to capture both cyclists as they were riding, but I was only able to capture one, just as he was leaving the edge of my composition. While I wish I had a shot of both of them, I am actually quite pleased with getting the one cyclist.

Posted under Abstract, University of Michigan 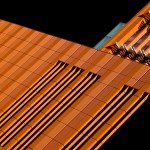 This is a shot of the new Ross School of Business building on the campus of the University of Michigan in Ann Arbor. The building was recently opened to students. I took this shot while it was under construction.

I took this shot of a classic diner at the Gilmore Car Museum in Hickory Corners, Michigan. The museum is a great place to view classic automobiles and if you like cars from almost any era, I highly recommend making a visit. The image itself was created from a digital photograph that I took while I was there. I modified the image to black out the sky and then I applied a Cutout filter in Photoshop to give the image a posterized look. I really liked how these changes brought out the color and design character of the building. 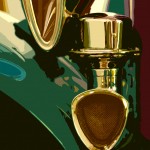 A few month ago I took a trip to the Auburn-Cord-Duesenberg Museum in Auburn, Indiana. The museum has a great collection of vintage automobiles, not surprisingly Auburns, Cords and Duesenbergs. I love these cars for their interesting details. This particular image was created from a digital photograph of a 1931 Cord convertible. This is a detail shot of the front fender area. I liked the various shapes in the image and I wanted to make the image less about the car and more about the shapes so I did some tweaking of the image in Photoshop. I played with the colors and used some artistic filters to create the image you see above. 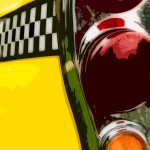 A couple of years ago I attended my first vintage car show. It was the Orphan Car Show held annually in Ypsilanti, Michigan. Each year the show features a handful of ‘orphan’ cars, cars whose maker or nameplate has been out of business for 7 years or more. In 2007, the Checker car company was one of the companies featured. 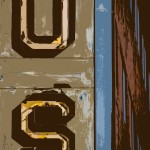 This is a somewhat stylized shot of the Greyhound bus depot in Ann Arbor, Michigan. The depot is still functioning, but the sign has seen better days. When I took this shot, I wanted to focus on the details of the sign and it’s current condition. The sign used to have a nice blue background for the lettering. Now, almost all of the blue is gone. When I started working with this image I decided to give it a bit more of a pop art look to it. The filter didn’t really have much effect on the sign itself, but it made the building next to the depot a bit more