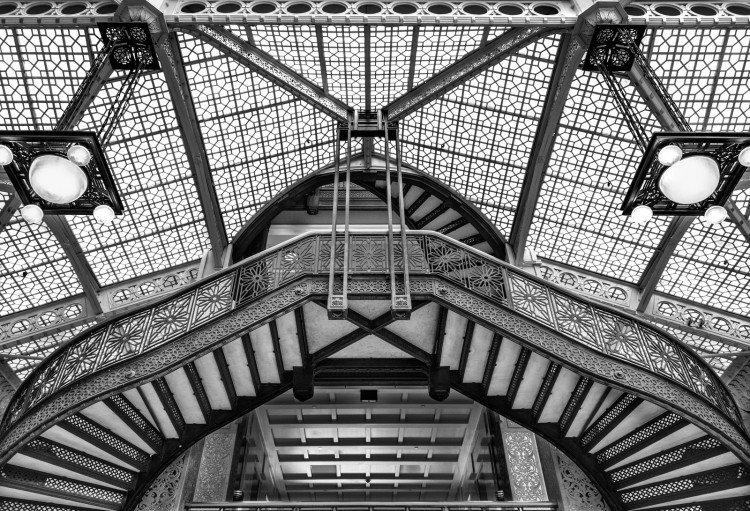 This image shows some of the wonderful architectural work done by Frank Lloyd Wright in Chicago’s Rookery Building. The building was built by Daniel Burnham and John Root and completed was completed in 1888. At the time it was one of the most expensive and largest commercial buildings in Chicago. The building’s name comes from a nickname given to the area prior to the construction of the building. The area had been home to Chicago’s temporary city hall and a water tank and had been called ‘the rookery’ because of the birds that nested there as well as the probability of being ‘rooked’ by the local politicians.

Frank Lloyd Wright opened his studio in Oak Park in 1898 and rented space in The Rookery Building as his Chicago office. In 1905 he obtained a commission to update the interior design of the light court and lobby areas. In the lobby areas, Wright covered nearly every inch with incised and gilded marble, removing or hiding the original decorative panels and railings. The incising was copied from John Root’s original design work. The staircases were squared-off and simplified, and Wright added geometric urns to the Adams Street entrance. Over time, the lobby area saw modifications and the wonderful translucent glass ceiling was covered with with paint, robbing the interior of light. In 1988, new owner L. Thomas Baldwin III set out to completely restore the building. From what I can tell, they did a wonderful job.

One of the interesting aspects of this building is that the Frank Lloyd Wright Preservation Society has offices in the building where Wright once worked. If you are in Chicago during the week, the Society gives free tours of The Rookery on a limited basis. More information can be found at the GoWright web site.

Regarding the image itself, I shot it from the edge of one of the lobby staircases, shooting back at these upper stairs. The original image was in color which had the benefit of showing off the gilding, but I was more concerned with emphasizing the patterns. The final image was created from double processing the image. I created both light and dark versions, using the light version for the stairs, and the darker one for the ceiling and underneath the stairs. I also used a bit of dodging underneath the stairs to brighten them up a bit. 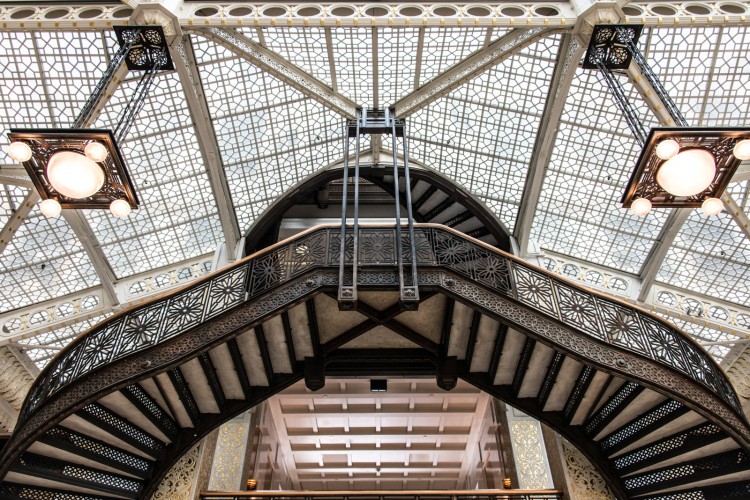 If you have any comments or questions, please feel free to leave them below.