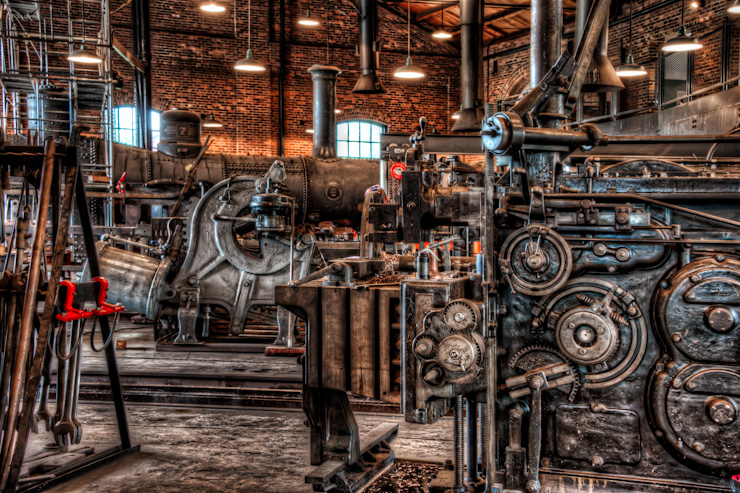 Taking inspiration from Dave Wilson, Bob Lussier, Brian Matiash, Jacques Gudé and others, I decided to go out this weekend and find some interestis generally nice to shoot as well. I happen to be a member of the Henry Ford Museum which has a great collection of old artifacts, mostly relating to manufacturing. Part of the museum membership also includes Greenfield Village, which is a historical village created by Henry Ford to maintain items of historical significance to American industry.

The image you see above was taken inside the DT&M railroad roundhouse located in the Village. The DT&M Roundhouse is a replica of a 1884 railroad maintenance building built in Marshall, Michigan, by the Michigan & Ohio Railroad. The original maintenance building serviced locomotives that ran between Allegan and Dundee, Michigan. The Village runs its own steam engines and this building, in addition to being used for historical display purposes, is also actively used in the repair of their engines and related items.

The interior is fairly dark, lit by period lighting (or something which resembles period lighting). The day I was there it was fairly overcast so there wasn’t any sunlight to brighten things up. I thought the collection of tools and maintenance machinery would make for an interesting HDR image. My plan was to take 7 shots, but I didn’t have a remote control and the exposures were long enough that I couldn’t easily hold the shutter release and let the camera fire off 7 quick shots. I bumped the ISO to 1250, but I still had shots lasting a couple of seconds. When I took the last shot, I must have bumped things a bit because it created just a tiny bit of ghosting when I processed the images in Photomatix. Rather than attempting to fix, I just decided to use 6 images instead.

The initial processing started in Lightroom. I used the noise reduction capability to eliminate some of the noise in the images before exporting them to Photomatix. My plan was not to go for a ‘realistic’ HDR, but rather to have something with just a bit of artificiality and something which would bring out the details in the metal objects. Once I had something I liked, I took the image into Photoshop. There, I used Topaz Adjust with the Clarity preset to add a bit more local contrast. I adjusted the saturation a little bit and the end result is what you see above.

I would be happy to hear what you think.