Posted on Mar.12, 2010, under Ann Arbor, Architecture, University of Michigan 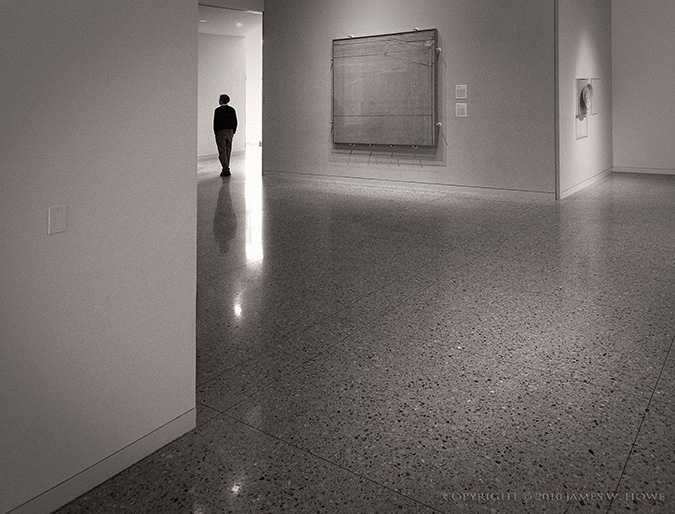 A few weeks ago my wife and I went to an exhibit at the University of Michigan Museum of Art (UMMA) called The Lens of Impressionism – Photography and Painting Along the Normandy Coast, 1850–1874. It was a great exhibition. Before the exhibit, I wandered around the museum. The museum consists of two wings, an old wing housed in a Beaux Arts style structure, and a new wing which was recently completed in a very modern style (seen here). My main focus was on the architecture and I took several interior shots. In general I’m not much of a ‘people’ photographer. I’ll wait until people are out of frame before taking pictures, particularly architecture. However, there are times when having the person in the right place makes the shot and I think this is one of those times.

The image itself started out as a vertical shot which emphasized the angles of the structure, but made the person very small. As I looked at it, I decided that I would crop it to make it a horizontal shot and place more emphasis on the person. I also felt that black & white was a better choice than color for this shot. Some other minor changes that I made included cloning out a bit of bench which protruded from the wall on the left side. I liked the clean line of the wall and the bench disturbed that line. Something I should have noticed when I was taking the picture. The other thing I did was to add a bit of film grain as well as a bit of toning.